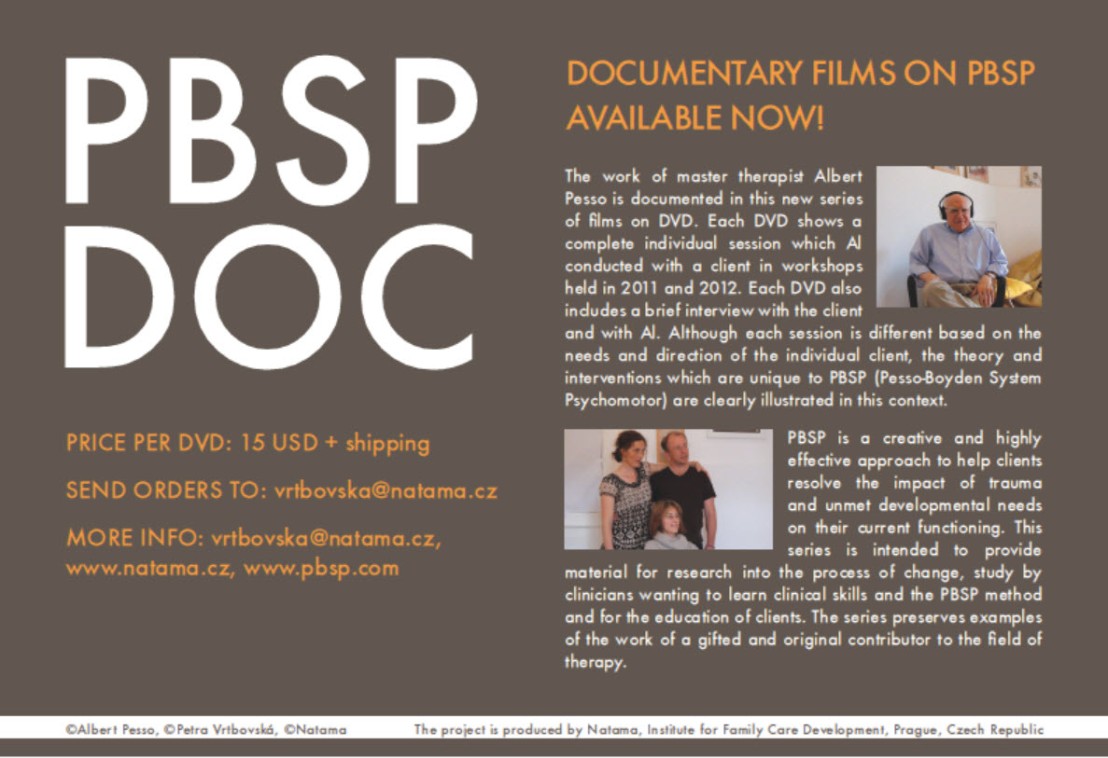 In this documentary PBSP co-founders, Al Pesso and Diane Boyden-Pesso, discuss their therapy’s origins and tenets. Also featured are Dr. Menno Witter, Professor of Neuroanatomy at Vrije University and Lowijs Perquin M.D., a certified PBSP Supervisor/Trainer and a psychiatrist on the faculty of the Psychiatry Department of Vrije University in Amsterdam.

“The Roots Of Justice Are In The Body,” a public lecture by Al Pesso sponsored by the Psychology Department at the University of Osnabruck (2007)

In this video PBSP Co-Founder, Al Pesso, discusses the following topics on PBSP theory and techniques: justice as fittedness; survival of the self and of the species; the creative and destructive forces of sexuality and aggression; the family network holes in roles; the dark side of justice – omnipotence; sexuality and aggression unbound; inclusive and exclusive justice; PBSP therapy applications; and closure, summary and perspectives.

“Introduction To Theoretical & Scientific Foundations of PBSP,” a lecture by Al Pesso for the Munich Association for Integrative Family Therapy (2002)

In this video filmed in 2002 PBSP Co-Founder, Al Pesso presents the theoretical and scientific underpinnings of Pesso Boyden System Psychomotor for the Munich Association For Integrative Family Therapy.   There is simultaneous German translation during this lecture.

“Introduction To PBSP Theory & Techniques,”  a lecture by Al Pesso for practicing therapists in Richmond, VA (2003)

“State of Mind – Healing Trauma,”  Democratic Republic of Congo 2010, 52 min. A SUKA! Production by Djo Tunda Wa Munga.  “In war torn countries people will not be able to be productive and development will fail until they overcome their trauma. Yet, Is it even possible for a country overwhelmed by the legacy of five million deaths to successfully heal and move on?  That is the underlying question in Congolese documentary filmmaker Djo Munga’s powerful film STATE OF MIND, about the use of psychotherapy to talk about loss, forgiving, and finding new memories to overlay the traumatic older ones. Pioneering therapist Albert Pesso is invited to Kinshasa, Democratic Republic of Congo, where many people suffer from years of post traumatic stress disorder. Pesso is there to train health practitioners in symbolic interaction, a form of relatively short-term, group-session based, psychotherapy. In the training sessions the health care workers themselves, many of whom are also survivors of horrendous violence, work through the therapeutic process with Pesso.  STATE OF MIND: HEALING TRAUMA captures the sessions in a series of fly-on-the-wall scenes, and candid, heartbreaking interviews with the participants put the effort in a larger context. A layered, engrossing and intriguing look at a national collective trauma and one ambitious initiative to try and heal wounds.

“Al Pesso, a Master therapist from the U.S. demonstrates how the language of trauma and recovery transcends language and culture, and that it is possible to install a sense of safety and protection in even the most traumatized individuals. A remarkable achievement.” —Bessel van der Kolk, Best-selling author of “The Body Keeps the Score” in which he writes about PBSP.

In this video of an excerpt from a lecture given in 2006 in Osnabruck, Germany, PBSP Co-founder, Al Pesso provides a brief introduction to the foundations of PBSP theory on Holes In Roles in family relationships.

“Introduction to humanitarian work in the DR Congo and PBSP theory with clips from a PBSP therapy session.” (2009)

This short video provides a brief introduction to Al Pesso’s humanitarian work in the Democratic Republic of Congo, reviews some core concepts in the PBSP theory of “Holes In Roles,” and offers a few clips of a PBSP therapy session.