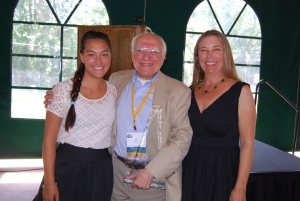 On August 12, 2012, the United States Association for Body Psychotherapy (USABP) honored Albert Pesso with a Lifetime Achievement Award in a ceremony at their annual conference in Boulder, CO.  Since its inception in 1998, the USABP has given only nine Lifetime Achievement Awards. We, at PBSP, are honored that Al is included in this group of leaders in the field of Body Psychotherapy. Prior award recipients include: John Pierrakos (1998), Alexander Lowen (2000), Ilana Rubenfeld (2002), Stanley Keleman (2005), Ron Kurtz (2008), Peter Levine (2010), Eugene Gendlin (2016), and Judyth Weaver (2018).

At age 82, Albert Pesso is one of three living masters of body psychotherapy. His contributions to the field over the past 50 years are innumerable; he has written or contributed to almost a dozen books and written more than 50 articles along with leading seminars worldwide in the Pesso Boyden System Psychomotor (PBSP) mind body approach he co-founded with his wife, Diane Boyden-Pesso. Pesso will be honored as the 7th recipient of the United States Association for Body Psychotherapy’s Lifetime Achievement Award during the August 2012 USABP Conference in Boulder, Colorado. He is also presenting a pre-conference workshop on “The Drive to be Happy in an Imperfect World,” August 9, 2012.

“We’re made genetically to be able to be happy in an imperfect world that is endlessly unfolding, and we are the local agents of that unfolding process,” Pesso said during a recent SKYPE call. “Our lives are not predestined, the world is not done, and we are not puppets in it. We are part of an exciting unfolding and participate in it.”

Read the rest of this article by Nancy Eichhorn in the USABP’s magazine Somatic Psychotherapy Today.

LISTEN TO  PODCAST OR READ THE TRANSCRIPT OF AN INTERVIEW WITH AL PESSO IN SOMATIC PERSPECTIVES ON PSYCHOTHERAPY, A JOINT PUBLICATION OF THE USABP AND THE EABP.

The USABP is a practitioner-centered member-driven association that is committed to the goals of organizing, representing and shaping the emerging profession of Body Psychotherapy. It is the only national organization of its kind in America. To learn more about the USABP’s Lifetime Achievement Award, click here.

This site uses Akismet to reduce spam. Learn how your comment data is processed.